Advantages and Disadvantages of a Triple Eccentric Butterfly Valve

In normal conditions, industrial valves are not subjected to a strength test while in operation, but after maintenance, the corrosion-damaged valve body and cover may be subjected to a strength test. In the case of safety valves, steady pressure, return pressure and other checks should meet with the standards and associated regulations. The valve strength test and the valve sealing test should be conducted on the hydraulic test bench before the valve is fitted back. Twenty percent of low-pressure valves must be tested randomly. If not qualified, all the valves should be tested; the medium and high-pressure valves should be checked 100 percent. Water, oil, air, steam, nitrogen, etc. are widely used as media for valve pressure testing. 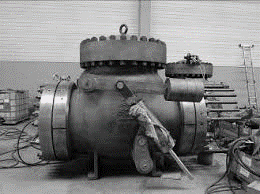 Pressure testing techniques for different industrial valves, including pneumatic valves, which are as follows:

The valve is normally placed in a pressure test rack during the strength test of the stop valve and the throttle valve, the valve disc is opened, the medium is injected to the stated value, and the valve body and valve cover are tested for sweating and leakage. The strength test can be carried out on a single piece as well. For the sealing test, only stop valves are being used. The valve stem of the shut-off valve is in a vertical state during the test, the valve flap is opened, and the medium is added to the stated value from the bottom end of the valve flap. Check the packing and gasket; after passing the inspection, close the valve flap and open its other end to check for leakage.

The strength test should be performed first if both valve strength and tightness tests are to be performed, then the pressure is lowered to the required tightness test value, and the packaging and gaskets are checked; then the valve flap is closed and the output end is opened to check if the sealing surface has leakages.

The gate valve’s strength test is the same as that of the globe valve. There are two techniques for the gate valve sealing test.

The pneumatic ball valve strength test should be conducted with the ball body half-open.

In the sealing test, from the outlet end, the testing medium is applied and the sealing surface is tested at the inlet end. No leakage at the packing and gasket, the valve gets qualified.

The sealing test shall be carried out as the test pressure with a nominal pressure value and the number of times shall not be less than twice, and no leakage shall be found to be eligible within the stated duration.

There are two ways to perform leak detection: one is to seal the safety valve joints, and the thin paper on the outlet flange is coated with butter. It is leaky if the thin paper is bulging, and the thin plastic is not bulging. To the lower part of the outlet flange, the plate or other plate seals are attached, and the valve disc is sealed by water filling. If the water does not bubble, it gets qualified. The number of tests of the safety valve’s constant pressure and return pressure shall not be less than 3 times and shall be qualified only if it passes the requirements.

Prev: The reason and treatment method of the Industrial valve can’t closed tightly

» Advantages and Disadvantages of a Triple Eccentric Butterfly Valve

» The History of Valve