Advantages and Disadvantages of a Triple Eccentric Butterfly Valve 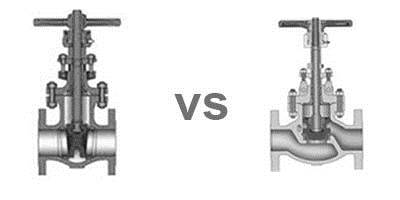 1. The variation in the working principles of globe valve vs gate valve.

The gate valve only has two states that are completely open or completely shut. The opening and closing strokes of the gate is quite wide and the opening and closing time is very long; the movement of the valve plate of the globe valve is much shorter and the valve plate of the globe valve will stop at a certain position during movement. For one, it is used for flow adjustment, while the gate valve can only be used for shut-off and has no other function.

2. The difference in performance the globe valve vs gate valve.

The shut-off valve could be used for cutting and adjusting the flow. The fluid resistance of the globe valve is relatively high, and it is more difficult to open and shut, however since the gap between the valve plate and the sealing surface is small, the opening and closing stroke are small.

3. Installation of the flow difference gate valve vs globe valve.

The stop valve must be mounted in full compliance with the position suggested by the arrow on the body of the valve. There is also a simple stipulation about the location of the inlet and the exit of the stop valve. China’s “San Hua” valve specifies that the flow path of the stop valve is from top to bottom.

4. The distinction in structure globe valve vs gate valve.

5. The difference in sealing surfaces:

The exterior housing (casing) of the gate and globe valves are identical, except the globe valve is built to act as a control valve, which ensures that it can regulate the flow by the percentage of the opening. The gate valve, however, is not intended to control the flow, but to stop the flow. The door valve should still be either fully open or fully locked.

» Advantages and Disadvantages of a Triple Eccentric Butterfly Valve

» The History of Valve